In 2011, I spent a semester at Berkeley studying cognitive linguistics with Professor Lakoff whose work I have admired since I read Moral politics in 1996. I was so convinced of the importance of his work that I returned in 2015 to spend a year working directly with George to develop a training program to help people put his work into practice. I am only now finishing this project, and the end result is the LeftWords training program you can learn more about here! 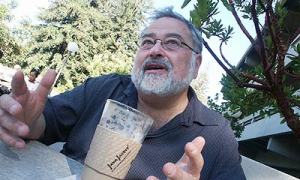 I had the privilege of working with the brilliant and delightful Professor George Lakoff at University of California, Berkeley. I went to study framing. I learned far more than I ever imagined about how our minds actually work.

These discoveries in cognitive science elevate Lakoff’s work on political framing from “good advice” to “critical truths we ignore at our own peril”. We have to understand the foundation of our competing moral systems if we are to succeed in reaching people and overturning the Right’s dominance over our public debate.

George Lakoff is considered one of the top gurus of political communication, best known for his work on framing and the foundations of conservative versus progressive value systems. Check out his best-selling “Don’t Think of an Elephant” for more on that.

What many people may not know, is that Professor Lakoff’s contributions to political communication are dwarfed by his enormous contributions to Cognitive Science. As the driving force behind the field of Cognitive Linguistics, Lakoff is at the very cutting edge of our understanding about how human beings actually think.

Cognitive metaphor theory is the first comprehensive model that not only effectively explains why we use language the way we do across the globe, but also provides testable hypotheses about how our thinking relates to our brain structure and neurological activity. So far, hundreds of psychological experiments have backed up this theory.

I am not going to try to explain cognitive metaphor theory. It took me 16 weeks and more than 10,000 pages of reading just to get the general idea.

What I can pass along to you here are my takeaways for how this information impacts our work as political communicators.

What does this mean for us?

Some time back in the 1950’s, the advertising world accepted the fact that people make decisions emotionally rather than rationally. Cognitive metaphor theory tells us that what feels rational to people, depends entirely on which metaphors they grew up with.

We often think that if we could do a better job of explaining our policies to people, they would have to rationally conclude that it would be in their best interest to vote for us. It is high time our folks accepted the fact that “rational” is relative. Different metaphors = different logic. If we promote progressive values using the language of progressive metaphors, our policy positions will feel logical to people.

This is not going to be easy. But it’s necessary. We have to stop reacting to public opinion and start driving it. We have to connect our individual agendas under the umbrella of our common world view.

You can start right now with this marvelous and very accessible piece  – Words That Don’t Work.

I learned more in my semester with George Lakoff than I have learned in any other comparable period in my life, and I had an absolutely marvelous time doing it. Professor Lakoff is astoundingly productive and yet makes the time to nurture students – even unofficial ones like me. He is delightful company, incomparably brilliant, relentlessly intellectually challenging, a deeply committed Progressive, a world class foodie, and a great friend. I miss him and the whole gang at Berkeley, and hope to get back there soon.